Strings with Ms. Thompson at Bushy Park ES and Clarksville ES
​Watch the video above to learn more!
Click here to SIGN UP NOW!
Be sure to fill out the sign up form ASAP! Classes will begin as early as September 21st!
​Make sure to reference the REQUIRED MATERIALS PAGE so that you are ready for your first lesson!
Do you have more questions? Come meet me at a MUSIC MEET AND GREET!
BPES: 9/16 2:00pm and 7:00pm meetcode: bpesmusicmeetandgreet
CES: 9/16 2:30pm and 7:30pm meetcode: cesmusicmeetandgreet

My name is Ms. Thompson and I am very excited to be starting my first year as the strings teacher at Bushy Park and Clarksville Elementary! While I won't be seeing you in person for a while, I can't wait to meet you on Google Meets and make music with you!

My primary goal as your strings teacher is to prepare every student musician to appreciate music as a performer, listener, and member of an orchestra community. In order to reach this goal, I will do everything in my power to help you develop adequate musical skills and promote your growth in musical understanding and appreciation.

In accordance with this goal, instrumental music is taught so as to develop in EVERY student:

Orchestra is a commitment of time, money, and emotion. In this class, students will develop a sense of responsibility and perseverance as well as a sense of teamwork and unity. Students involved in orchestra are making a primary commitment for the entire school year.

There is much that is still unknown about this school year.  However, there is one thing I know for sure... we can make music in any situation and we need it now more than ever! I am committed to making virtual learning as meaningful and valuable as possible. I am ready to be creative and open-minded in the face of this new challenge.

I hope each and every one of you will join me in orchestra this year as you strive to do your very best! Here’s to a very fun and musical year! 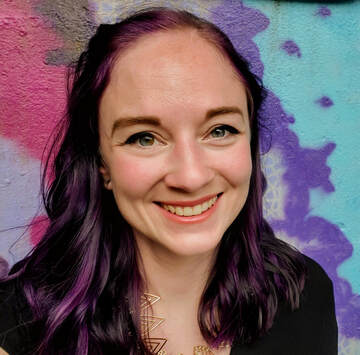 In addition to teaching full time during the school year, Ms. Thompson is also the Executive Director of Bass Works, an internationally renowned intensive summer program for bassists aged 5 and beyond and faculty. She is the also the co-founder of Basstravaganza, a small group bass summer camp for school aged musicians in Northern Virginia. A lifetime member of the International Society of Bassists, she has assisted with the young bassist division of the organization’s biannual conference.

Ms. Thompson frequently acts as a guest conductor, clinician, and adjudicator in the Greater Baltimore area. She has acted as an orchestra assessment adjudicator and clinician in Cecil and Howard County, and has served as the guest conductor for the Calvert and Cecil All County orchestras. Ms. Thompson has also served as a solo and ensemble adjudicator in Howard County at the elementary, middle, and high school levels.
​
When she is not teaching or conducting, Ms. Thompson performs as a freelance musician on the double bass and electric bass as well as on the violone and viola da gamba.  She equally enjoys performing with orchestras, musical pits, and early music ensembles.

Outside of the music world, Ms. Thompson loves to pursue her three favorite hobbies, yoga, baking for her friends and family, and spending time with her dogs Banjo and Devo.